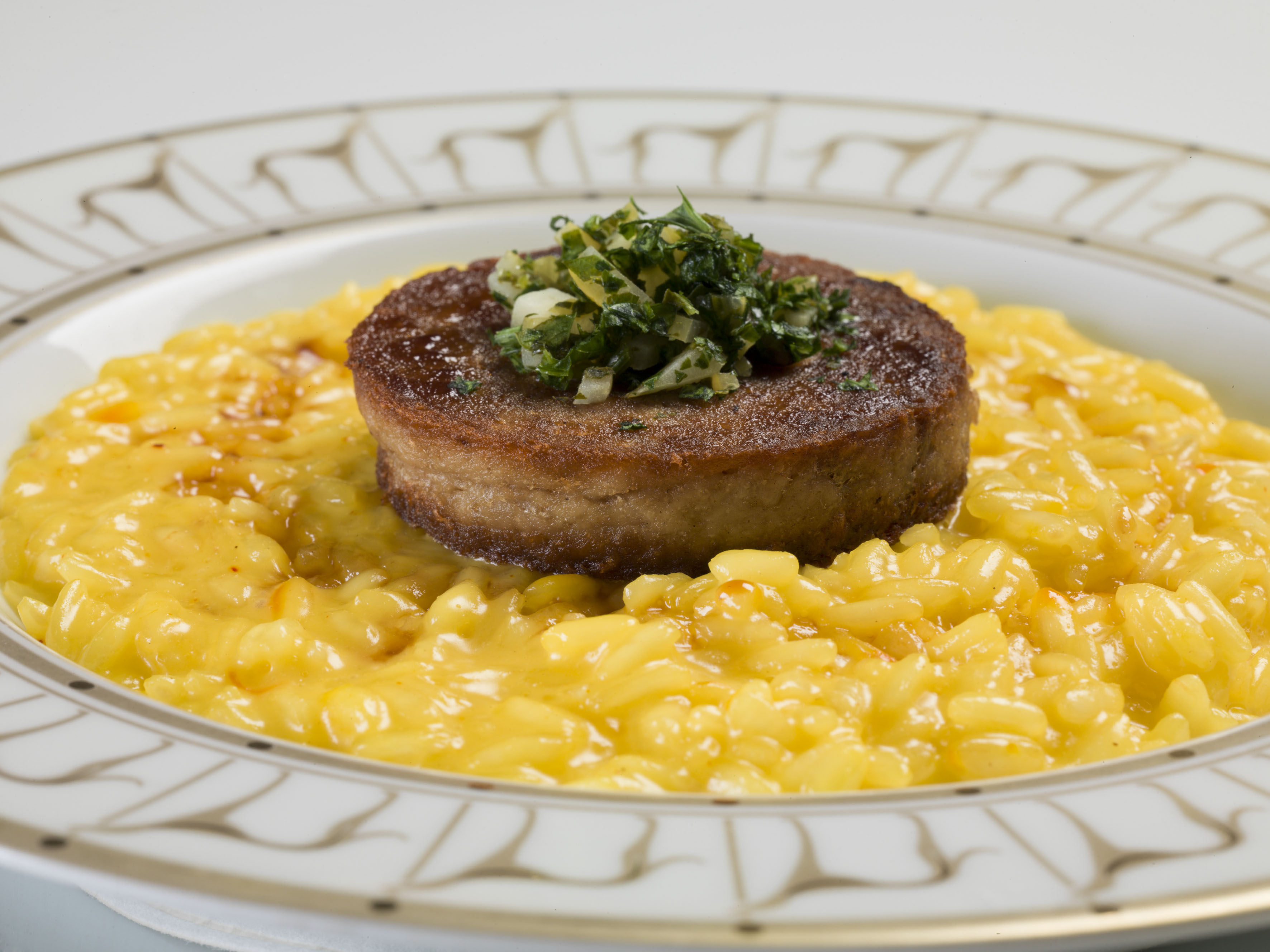 In its 18th Century definition, osso buco was cooked without the tomato, that was added almost always from the end of the century on.
Gremolada is a sauce made of chopped lemon peel, rosemary, garlic and parsley where the presence of lemon preserves a decidedly rococo touch.
The very name of the dish, made from a slice of veal shank (or shin) preferring the hind leg underlines the importance of the bone and even more so of the hole for the recipe's success.
The hole is in fact full of marrow, which when the surface melts during cooking gives the sauce its correct consistency and mellows its flavour.
According to Milanese tradition, the remaining bone marrow is then scooped out of its hole with the special spoon, ironically called a "tax collector".

The ingredient: lemon in cooking

Although it is not a fruit from Lombardy (it only grows on the banks of the larger lakes) it is a very refined ingredient in regional cuisine.
This culinary association started in the Middle Ages when lemons together with wild oranges (the naranzi from 14th century recipe books), which had not yet been grafted to produce a sweet variety, were used like spices.
With the Enlightenment revolution in culinary techniques and in flavour, the use of spices was drastically re-ordered, while that of lemons, considered to be a more natural food, less artificial than spices, remained constant, to be used to give a taste impact to foods similar to that previously achieved with vinegar or verjuice.
We can date almost all those traditional recipes like gremolata, flavoured with lemon zest and without other spices back to the second half of the 18th Century (while the use of strong spices like cloves, cinnamon and nutmeg go back to more ancient times).
In the following century the juice of the citrus fruit was preferred to the zest, while the latter remained an ingredient used for making many sweets, leading to the acidic register not only of fish cuisine, but also of many meat dishes, from fricassee to cutlets and liver alla Milanese, from mixed fried platters to escalopes to jellied veal, to jugged gamebirds.

• Flour the osso buco;
• brown them in half the butter in a wide pan;
• add the wine and leave to evaporate;
• adjust salt and pepper;
• cover the pan and cook over a low heat, turning occasionally and adding stock as necessary;
• meanwhile prepare the gremolata by finely chopping the garlic, parsley, lemon rind, sage and rosemary;
• just before serving add the gremolata to the meat juices together with the remaining butter.

Alternatives:
Flouring the osso buco, generally done in the past to ensure they remain tender, is no longer obligatory for today's more tender meat (but even Artusi had given up on it, adding the flour afterwards to thicken the sauce).
Ham or pancetta is sometimes added to the pan when browning the meat, while other recipes only use onion.
In more recent versions the gremolata sometimes has no rosemary or garlic, but uses sage, marjoram and even an anchovy fillet.
As a complete meal it can be eaten with yellow rice and polenta.
As a main course, it must follow a light first course and may be accompanied by fresh peas, green beans or potato purée.
An intense Sassella from Valtellina, with a fruity aroma or a Cellatica from Brescia, flavoursome and slightly bitter, are the classic wines to accompany this dish.