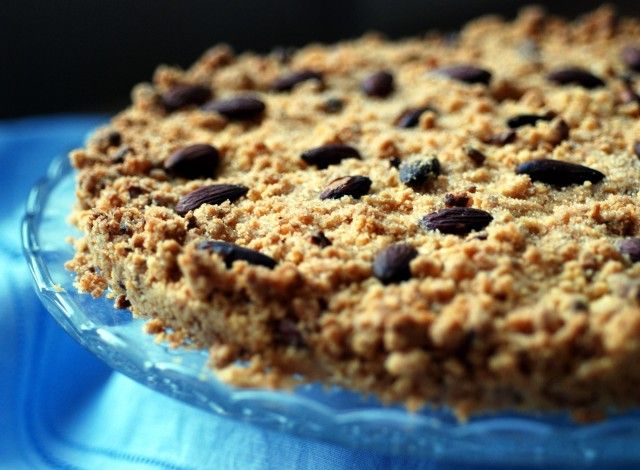 The basic version calls for equal quantities of white flour, maize flour and sugar, roughly measured using cups and this is why it is also called the "three-cup cake".

They are the fruit of a tree (Prunus communis or Prunus amygdalus) that has its origins in Asia Minor and there are two varieties; a sweet one, used for food and a bitter one that is mainly used for pharmaceuticals.
Almonds are a typical ingredient of Southern gastronomy and cake making. Traditionally, in the Lombardy area, walnuts were used for country dishes of an older tradition, written about by Bonvesin de la Riva from Legnano in the13th Century, which were abundant all over the Milan territory and were a common food even in the houses of the poor.
Contributions from the 16th Century based on deep rooted original popularity have instead also kept up the tradition in Mantua cuisine, together with a certain ostentatious taste for fancy dishes, for the use of some typical ingredients of princely gastronomy (almonds, spices, sugar and honey), which here appear more often than in other areas.
Almonds, omnipresent on the tables of medieval and renaissance aristocracy, with their heavy apotropaic reputation associated with the symbolism of light and the esoteric mystery of rebirth, were the nuts of the rich (for Latins the term nux indicated both walnuts and almonds), purified from the negative charge that was on the other hand attributed to walnuts due to their presumed relationship with witchery.
This was true at least until the last century when the creation of amaretti biscuits from Saronno brought the vague aroma of almonds even to tables that were not exactly princely.
Almonds come under the category of oily fruits, nutritionally characterised by a high content of fats and calories and a discreet quantity of protein: 100 g of almonds contain 542 kcal, 51 g of lipids and 16 g of proteins.

Alternatives:
In the countryside the basic recipe has no almonds.
The older versions do not include eggs, nor butter, nor lard, ingredients that on the other hand are accepted by most modern recipe books with the aim of aiding mixing and of making the cake less crumbly. In some cases the mixture is flavoured with grated lemon rind.
Sugar (granulated or icing) is sometimes sifted over the cake once baked.
Notes: mix with patience
The ingredients must be mixed with patience, but they will in any case not bind completely.
Once the mixture has been put into the cake tin, it must be pressed by hand to give it an even thickness.
In the various zones of the region this kind of cake is among the most widespread, even under other local names, such as barlocca or tortionata.
An identical mix is used for the traditional Sant'Angelo Lodigiano biscuits, colissoni.
Even pan dei mei comes from the same recipe, prepared with infinite variations all over the region, which however does not crumble as the ingredients are mixed together with eggs and milk.
It can be served on its own or with mascarpone cream, or with cavolatte (a kind of vanilla custard), accompanied with Sangue di Giuda from Oltrepò, soft, full-bodied wine with a lasting sweet undertone.